This year, the average home price in Metro Denver reached over $500,000!  Actually, it’s more than that: $543,058 to be exact.  When I told my dad his jaw dropped.  “I just cannot believe that, half a million dollars is ridiculous,” he said.  We were arguing about it being sustainable or not, going back and forth.  He already heard me talk about the high paying jobs moving, the DINK’s with disposable income (Double Income No Kids) and comparability to markets in San Francisco and DC.  Unable to retort, I thought back to a story he told me years before.

In 2011 I decided to get my real estate license.  I was in the middle of buying my first investment property and my dad said, “It may seem like a lot of money to spend right now, but it will pay off in the future. When I was growing up, grandpa told me how much he paid for his house.  It was twelve thousand dollars and I thought, gee, how am I ever going to afford a house on my 25 cents a week allowance?”  Noticing the irony with his present day stance, I calmly gathered my thoughts and said, “Remember when you told me how Grandpa bought his house for $12,000?  And today it’s worth $300,000? It’s the same thing!”  This isn’t the place to get into talking inflation or money supply, my point is that in the long run prices always increase.  My dad may have been able to get a couple 5 cent hamburgers with his allowance back in the day, but you can’t get a hamburger and a beer for under $20 today! 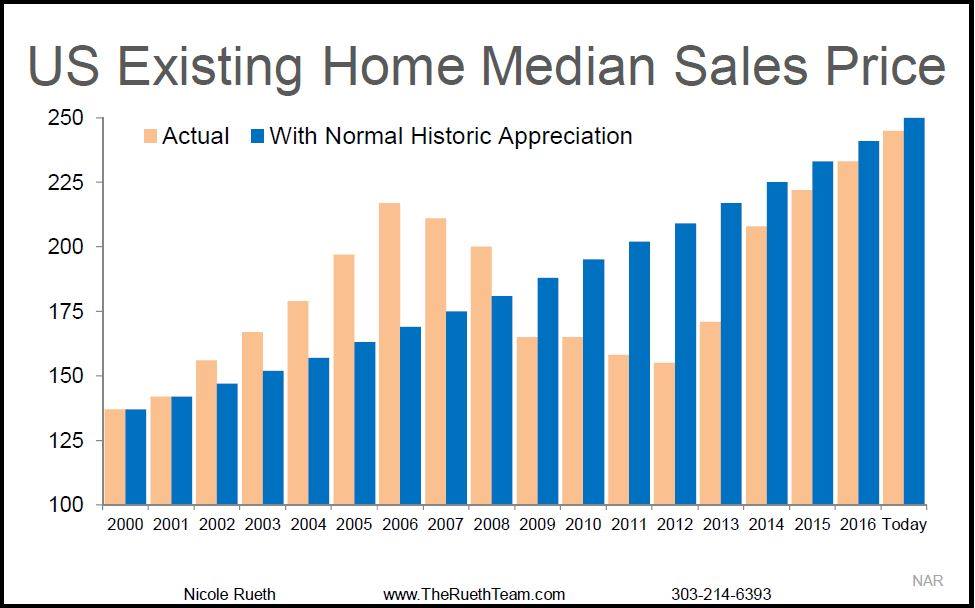 First of all, there IS a bubble!  But, it is in 2005.  In 2002-2003 sales prices soared upwards, driven by lenders giving ridiculous mortgages to anyone who had a pulse.  Just like in The Big Short it all came crashing down in 2008.  You can clearly see on the graph the inverse parabola sinking down ward indicating the “pop”.  As foreclosures flooded the market, it took years for the inventory to be consumed until 2013 when demand finally surpassed the supply.  .

Secondly, and the thing I notice most about this graph, is that we are technically STILL BELOW our projected sales price!!!  If you look at the far right of the graph, the median sales price is still behind its projected price assuming constant appreciation.  There has been a lot of speculation about our market being in another bubble. “The massive appreciation we’ve seen is unsustainable and in need of correction.”  I don’t see it that way.  I think the appreciation we’ve seen IS the correction.  If you were to go back to 2001, take the entire boom and bust of the housing market and appreciate the prices at 5% per year, we would be right about where we are today!  I do think there will be a “normalizing” of the market in the future, but I don’t see a massive downfall others are scared of.  It’s not to say that there will not be a shift in the future, and there will be; however, it is safe to say $500,000 is at the very least the new norm.

Sell or Lease Your Luxury Property

Please provide your contact info and a little about your property and one of our consultants will be in touch shortly.

Thank you for your interest in Sophisticated Properties. One of our contacts will contact you soon.

Join our mailing list to receive the latest news and updates on the Denver Real Estate Market.

You have Successfully Subscribed!

Get to Know Denver with One of Our Property Consultants

Please provide your contact info and when you will be in the Denver area for a tour!

Thank you for your interest in Sophisticated Properties. One of our contacts will contact you soon.